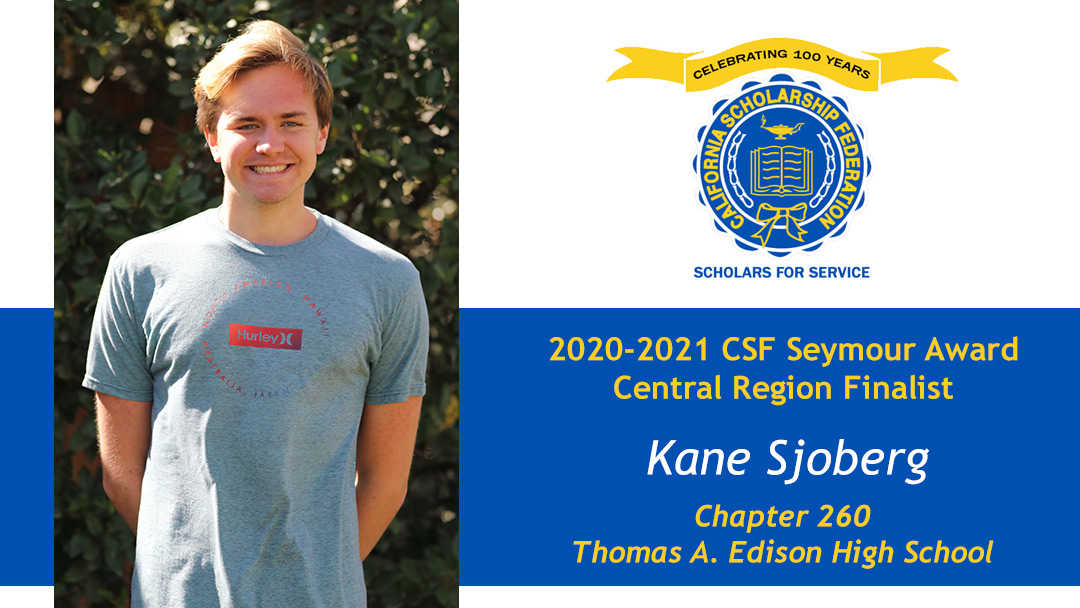 Kane Sjoberg is a student at Edison High School in Fresno and serves as Vice President for his CSF chapter. He is an officer for the Model United Nations and Philosophy Clubs, and has participated in the Math, French, Battle of the Books, and Chess Clubs. Kane is also the team captain of both the swim and water polo teams. The water polo team won a championship, and was runner-up (2nd place) the following year. Kane individually qualified for Valley Championships (Section Finals) all four years. Through his experiences with these teams, he developed as a leader inspiring him to form inclusive locker rooms. Kane writes “Mutual respect for human dignity is unifying, and leaders garner respect through compassion and humility; coercion inspires intimidation and fear.”

Slaten R. Van Saun, volunteer photographer for Fresno USD, describes Kane as someone with “an endless hunger for knowledge and to learn as much as possible.” Consequently, when Mr. Van Saun set out on a complete backyard renovation project, he asked for Kanes’ assistance because he felt Kane would challenge both to perform their best. Kane demonstrated a similar dedication to the Fresno County Public Library. His CSF advisor, David Wisar, writes “he managed a budget, connected with various French language community groups for input, and helped build a robust catalog so that anyone in the community could have access to resources they need to learn French regardless of status or funding.”

Kane will attend Harvard University and is interested in astrophysics or planetary sciences.