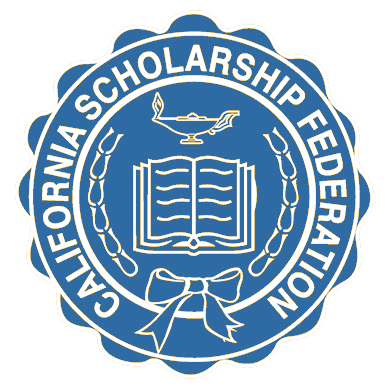 The California Scholarship Federation, Inc. is a nonprofit organization whose mission is to recognize and encourage academic achievement and community service among middle and high school students in California. There are approximately 1500 chapters in middle school and high schools throughout the state, and each chapter is comprised of students members who meet eligibility requirements. Each chapter is led by a staff adviser.

Eligible students become members by submitting applications based on their report card grades. Membership is for one semester, and membership drives are held each semester within established periods dictated by the State bylaws.

The idea for a state-wide organization to honor outstanding high school students was first proposed by Mr. Charles F. Seymour at a convention of high school principals in Oakland in 1916. Mr. Seymour was then vice-principal of National City High School in San Diego County, and in 1916 he had organized a scholarship society on his campus, modeling it after one already established at Long Beach Polytechnic High School. No action was taken on his proposal at that time.

For the next five years Mr. Seymour led an active campaign to win support for his idea. As a result, a number of schools throughout the state organized similar societies. Two of these, National City and San Luis Obispo, began to use a seal patterned after the one used by Long Beach. These were the first steps toward affiliation. In 1921 Mr. Seymour, now head of the Social Studies Department at Long Beach Polytechnic, again appeared before the Principals’ Convention in San Rafael and asked that a state-wide scholarship society be founded. Despite significant opposition, Mr. Seymour’s idea carried the day, and a few weeks later all high school principals received an invitation to send representatives to Los Angeles on June 4 to establish such an organization.

In June, a committee of five began work on a constitution, which was finally ratified on October 15. Once the California Scholarship Federation had become a reality, thirty-four schools applied for charter membership. Twenty-nine of these received full status immediately, and chapter numbers were determined by lot. All subsequent chapter numbers have been assigned in the order of approval. The list of charter high schools appears here.

While students have never participated directly in the establishment and maintenance of eligibility standards, a means of student expression has been sought from the very outset. To this end the first student convention met in Pasadena in December, 1921. This meeting produced a “Student Branch of the California Scholarship Federation” established to hold an annual banquet and conference each Christmas vacation and to serve as a clearinghouse for the exchange of ideas among student leaders. During the 1925-26 academic year the format was expanded to include two meetings, one in the southern part of the state in December and another in the central or northern part in April. The first spring convention was held in Stockton.

Currently, the Student Branch of the California Scholarship Federation has been replaced by regions.

The annual convention in Sacramento on October 18, 1930, voted to incorporate under the laws of California. Articles of Incorporation were adopted and signed at this meeting. The CSF constitution thereupon assumed the nature of by-laws appended to the Articles. The California Scholarship Federation thus became a legal entity, capable of making valid contracts and receiving bequests.

One of the functions of CSF has been to recognize academic accomplishment in tangible ways. The original constitution provided for only one award, an embossed seal placed on the diploma of each qualifying graduate. Many voiced the desire for a pin to be worn by student members, so at a special meeting on December 20, 1922, the CSF lamp pin was approved, to be awarded only to qualifying seniors. Subsequent to this, several chapters began using local membership pins. In 1927, the April CSF meeting held in Fresno approved a “semester membership” pin, but its use was optional and has since been discontinued.

Beginning in 1925, the Board of Directors initiated a program with several colleges and universities so that tuition scholarships were set aside specifically for CSF Life Members. Today there are still a few colleges and universities in California and throughout the nation that participate in the program. CSF Life Members need to check with the individual college or university upon admission. Through the years, a number of award programs were established to recognize student academic achievement and community service.

Service to the Community

Since the organization’s inception, over 1500 CSF chapters have been approved. Today’s chapters continue to foster the recognition, motivation, and education of academically talented students. Chapter memberships promote the CSF ideal of service to their communities.

In 1967, the California Junior Scholarship Federation (CJSF) was founded to foster high standards of scholarship, service and citizenship in the middle school/junior high grades. Like CSF, CJSF emphasizes service to the school and the community while encouraging pride in scholastic achievement. In recent years the rapid growth of the California Junior Scholarship Federation (CJSF) has greatly strengthened CSF.

Listed below are the first high schools to join the California Scholarship Federation, Inc. when it was established in 1921.

Fun fact: When CSF was founded, these chapters received their chapter numbers through a drawing since all wanted to be chapter #1.