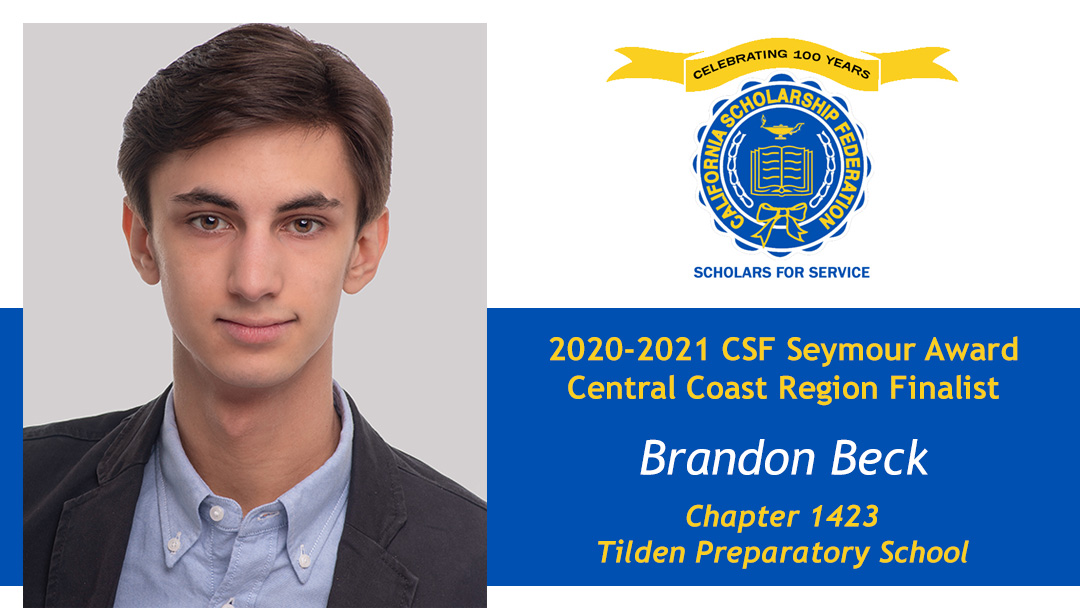 Brandon Beck is a student at Tilden Preparatory School in Walnut Creek.  Brandon is the president of the Tilden Leadership Club, and the founder of the Tilden Music Club.  As a part of the Tilden Debate Club & Social Justice Club he is active in promoting awareness of current social justice issues occurring in the world and community.

Brandon is an accomplished singer and has performed in a number of musical theatre productions as both a volunteer and a paid performer.  Among his performances, Brandan has played Gavroche in Les Misérables at the Contra Costa Musical Theatre and improvised interactive shows for children at the Chevron Family Theatre Festival.

Brandon is a Youth Ambassador to the Narcolepsy Network, an organization that raises awareness of, and advocates for, narcolepsy and other rare diseases. In his personal statement, Brandon expresses how personal challenges have led him to advocate for others, which has included a trip to Washington DC to lobby on Capitol Hill for support for science-driven policies that improve and save lives.  Brandon delivers presentations and leads discussions during nationwide webinars that assist youth and young adults.

Brandon states, “My goals are to create an inclusive environment where everyone feels empowered rather than diminished. I am dedicated to creating hope by changing the healthcare landscape and improving healthcare outcomes…I am looking forward to the challenge!”  To bridge the gap between innovation (science and technology) and the patient, Brandon will pursue degrees in Economics and Business Administration, and hopes to attend UC Berkeley.

Jane Muller, Brandon’s CSF Adviser, talks about Brandon thusly, “With his enthusiasm for life, his natural empathy for those around him, and his innate emotional intelligence about others, he has the capability to be a strong leader.  It is extremely rare to encounter someone that is so gifted intellectually yet so humble and genuine.”

Cynthia Zorn, the Director of the Narcolepsy Network’s youth program, explains in her letter of recommendation for Brandon, “It is a privilege for me to share his extraordinary commitment to his work and leadership responsibilities, his loyalty to fellow volunteers, and his gifts for listening and demonstrating empathy toward people of all ages.  He is a great inspiration to many, young and old alike.”