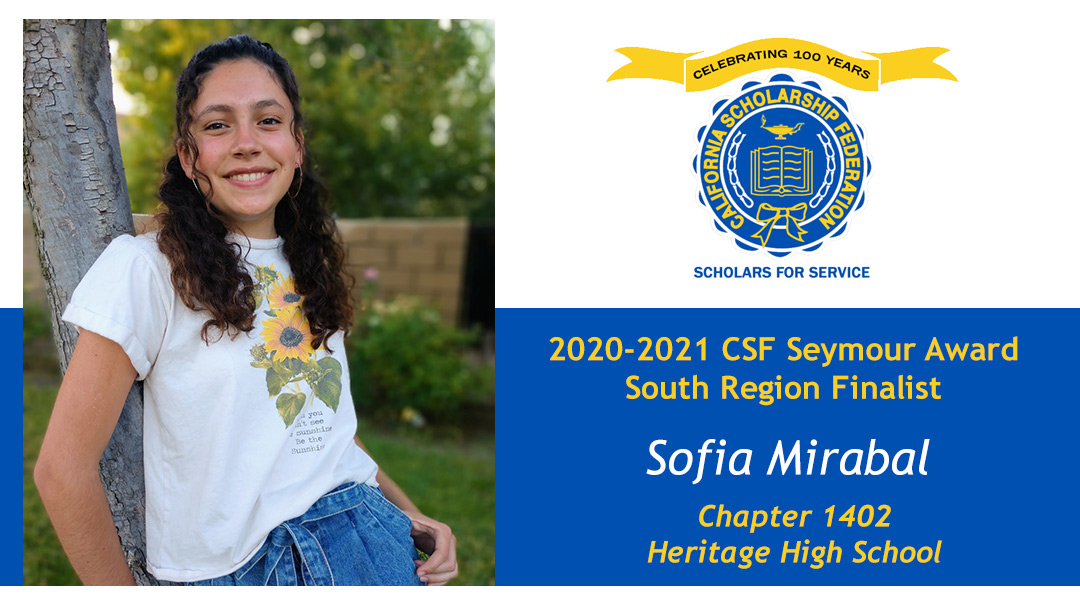 Sofia Mirabal is a student at Heritage High School in Menifee where she is the president of her CSF chapter.  She is also the president of the French Club, and Gifted and Talented Education.  Sofia is active in Mock Trial, Interact Club, Marine Biology Club, Avid Club, Key Club, Biomedical Club, and the National Honors Society.  As a scholar-athlete she participates in track and field, and runs cross-country.  Sofia has been inducted into the Société Honoraire de Français, where she participated in a service project writing thank you letters in French to essential workers in hospitals and grocery stores.

In her community she is a Youth Leader at Saint Vincent Ferrer Church, a Youth Ambassador in People to People, a library volunteer, and a volunteer for Habitat for Humanity.  Sofia has received numerous awards and recognitions, including the Excellence in French Award, and Most Valuable Participant Award in the Riverside Mock Trial Program.

Heritage High School’s CSF Adviser, Courtney Ziani, begins her letter of recommendation for Sofia thusly, “Sofia Mirabal is one of the most outstanding and impressive students I have ever encountered…she will make a great impact in our world..”. Ms. Ziani goes on to explain that, as CSF president, Sofia has helped increase their membership to over 300 students, and led on-line meetings of over 100 students, explaining “This is the most CSF student engagement I’ve seen in all the years I’ve advised this organization.”

Sofia’s community letter of recommendation came from Allysha Mae Lucero Gillo, with the STVF Youth Ministry.  Ms. Gillo states, “Sofia’s contribution to our community is wonderful.  She has been a light to our ministry…not only very outgoing and joyful, but she is also a natural-born leader.”

In her personal statement Sofia tells how a middle school forensic  lab sparked the desire for her to pursue the sciences, and become a forensic pathologist.  She explains, “What once seemed like a blind search in the fog, became a clear path in the road.  I aspire to be a medical scientist exploring cures for genetic diseases.”  To that end, Sofia hopes to attend Harvard University to major in bio-medicine/molecular biology and genetics.