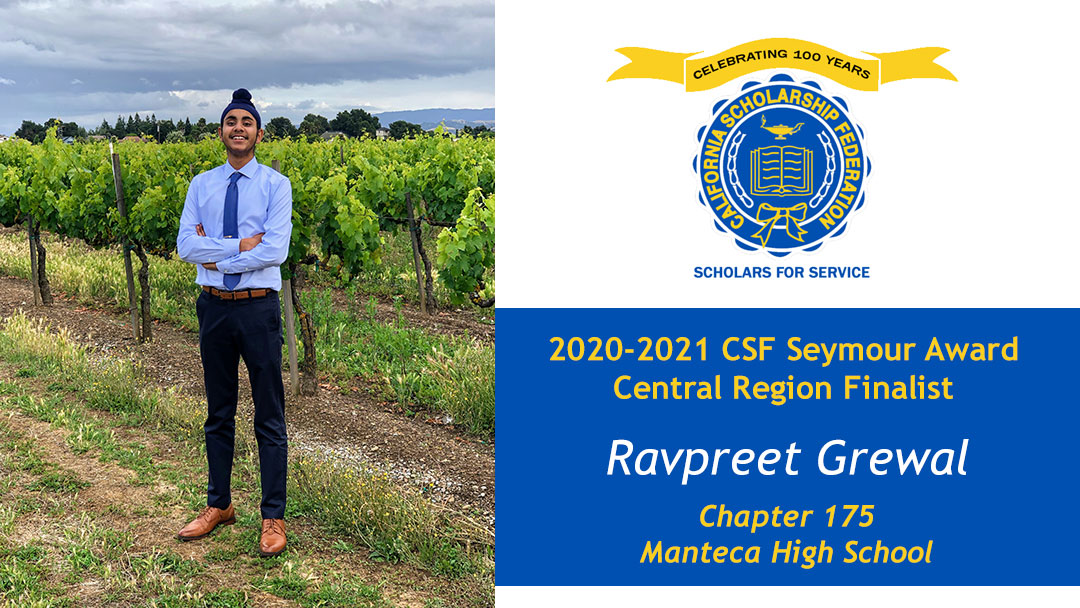 Ravpreet Grewal is a student at Manteca High School and is serving as the Activities Director of his CSF chapter. CSF activities include Pizza and Play and the Sock Drive. He also serves as the Academic Decathlon Vice President, on the Executive Board for the College Prep Club, and has served as an officer in the Chemistry, Robotics, and P.E.A.C.E. clubs. While participating in the Academic Decathlon, he earned 3rd Best Overall Performer and 10 individual medals. Ravpreet is also the captain of the tennis team, where he was the Division 4 Section Champion in 2019. He served as a student volunteer at the Manteca Public Library. In addition, he has two years of experience with Math Bridge helping frosh transition from middle to high school. Having served 354 hours of volunteer work at the Doctors Hospital of Manteca ranging from working the front desk to working alongside nurses, Ravpreet was presented the 2020 “Making a Difference” award.

Joyce Bowmar (Senior Advisor of the Student Volunteer Program at Doctors Hospital) proclaims “Revpreet’s caring nature and personality allowed him to work well with others in a team environment”. She also stated he became a trainer for other students.

When asked to describe something unique about himself, he quickly responded ‘adaptability’. This stems from his immediate family moving to the United States from India in 2017 and the challenging (yet successful) assimilation process that transpired thanks to his local family. To that degree, he states “I pledged I would never let that happen to anyone that may be in the same situation I was.” Thus, he has utilized his knowledge of Hindi, Punjabi, French, and English to ease the transitions of five students.

Ravpreet plans to attend the University of California, Berkeley and major in data science.