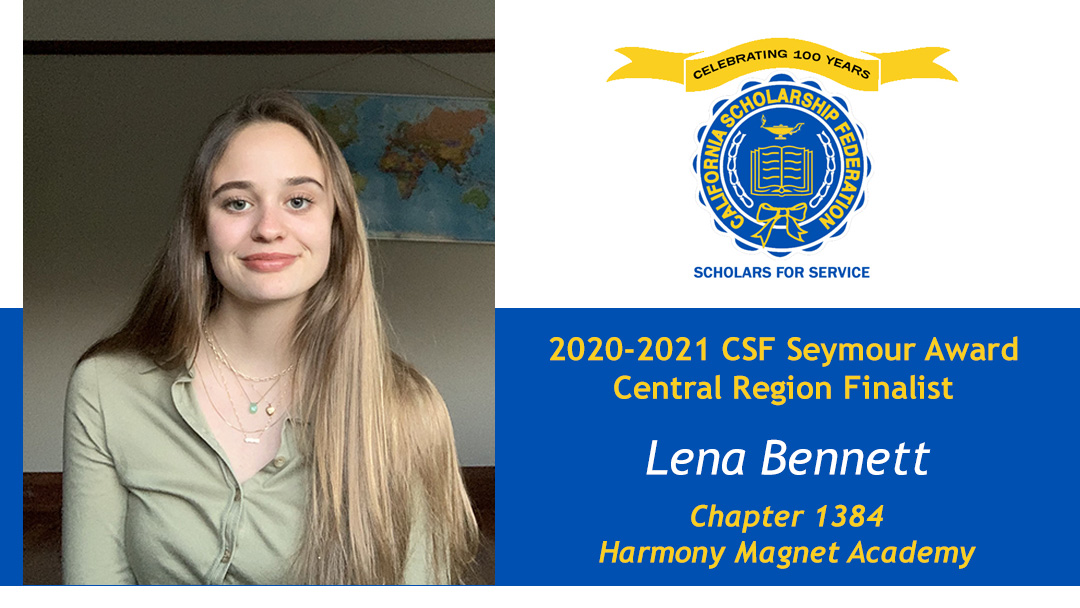 Lena Kate Bennett is a student at Harmony Magnet School in Strathmore and is serving as the CSF President. Her activities include the Harvest Festival fundraisers, Valentines for Vets, thank you letters to firefighters, letters to veterans and seniors as well as collecting donations for a pet, women’s and homeless shelters. She is also President of Associated Student Body and Junior State of America clubs and Treasurer of Harmony’s Science Club. Lena is currently serving as the Porterville School Board Student Representative and as the LCAP Student Representative. In addition, she has participated in Link Crew, served as a math tutor, and played tennis and volleyball.

Lena states “Being a part of CSF has served to deepen my motivations to solve problems in the world and helped to nurture my beliefs that I can create change.” To that extent, she created Happy Heart to support and empower middle school girls who are often going through many, often difficult, life changes. During her internship with Food Link, she recognized a similar need for support of local families due to societal inequities.

To extend her potential influence, she has interned at campaigns for Andrew Janz and Drew Phelps. Andrew Janz recalled an event where Jena had to step in to introduce him “She spoke articulately, commanded the attention of the audience, and invoked a sense of positivity in the potential future of our community.”

Throughout her high school years, Lena has consistently espoused high expectations for herself. Her CSF advisor writes “she is mindful of what she does, . . ., sets high, but realistic goals for herself, and works consistently to reach them.”

With that in mind, Lena hopes to attend Columbia University and major in Middle East and Islamic Studies.