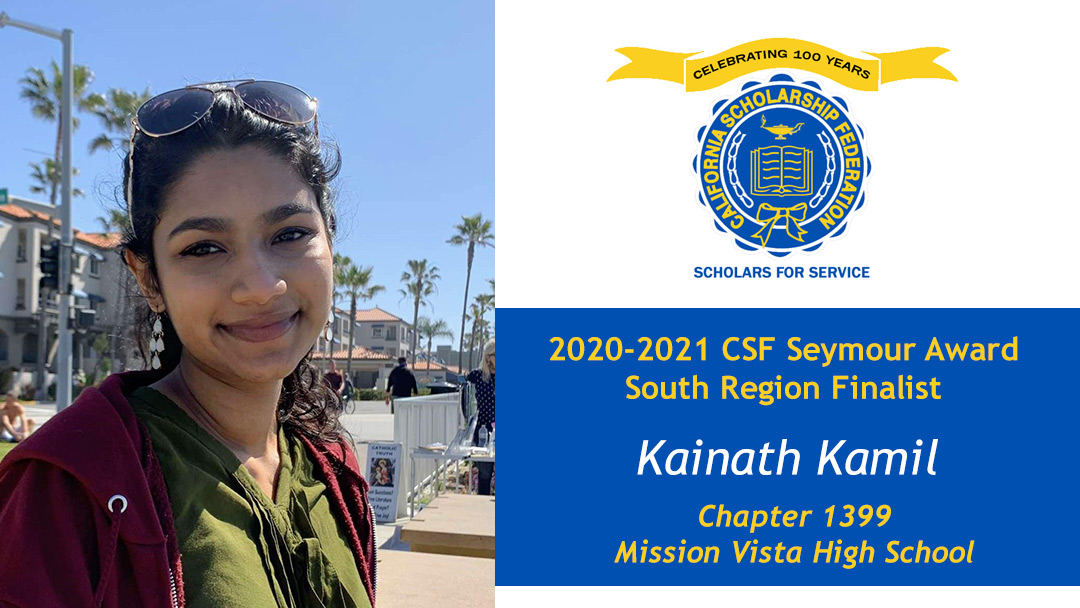 Kainath Kamil is a student at Mission Vista High School in Oceanside.  She has served as CSF publicist, treasurer, and currently as president of her chapter.  Among many CSF activities, Kainath has participated in the awards night, a field trip to UCI, book-sorting, and the fall fundraiser.  Besides being CSF President she holds officer positions in the Health Occupation Student Association, STEM Club, Academic Team, Students Together Assisting Refugees, and TedxYouth.  Kainath is the co-founder and president of a non-profit organization called the San Diego Youth Environmental Association which promotes environmental interest in youth.  She has worked with a mentor from UC Berkeley on a project on genetic engineering, and has also worked on a study of genes involving caffeine addiction in fruit flies.  Kainath’s volunteer work includes working at a soup kitchen and working with the SEED program in Bangalore, India.  For her numerous volunteer hours, Kainath has received the 2020 President’s Volunteer Service Award.  She is currently employed as an Addiction Dad Scientist.

In her personal statement Kainath explains how she is the daughter of a serviceman and immigrant from India, stating, “My world was built with Indian values and Indian love.  Family comes first, next to education.”  These teachings place her on a path of self-discipline which enhances her passions and work ethic.

Kainath’s CSF adviser, Joy Straub explains how she has worked closely with Kainath for past three years, and has observed her strong leadership ability and her innate ability to lead and serve.  Ms. Straub explains, “[Kainath] has strength in humility that leads our club to confident and active in our community.”

Denise Seymour, the Volunteer Co-ordinator at Brother Benno’s Soup Kitchen expresses how Kainath, as a regular volunteer, “…spreads so much joy and exhibits kindness that is rare in a heart so young.”

Kainath dreams of attending UCLA, and becoming a bio-engineer.