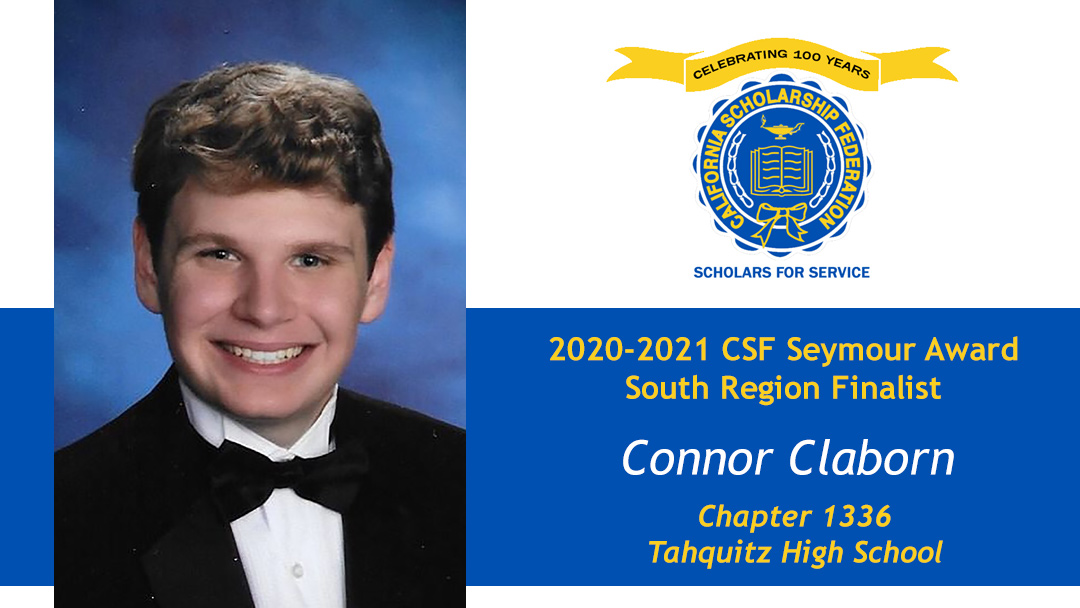 Connor Claborn is a student at Tahquitz High School in Hemet.  He has been the vice-president of his CSF chapter, participating in such activities as Pennies for Patients and the CSF Panda Express fundraiser.   Connor is also active in the Calculus Club, the Engineering Club, and was a Boys State delegate.  As a varsity tennis player Connor has three times received the MVP recognition, as well as the Hemet Unified School District Outstanding Athlete Award, and CIF Mountain Pass All League MVP.  Connor’s list of academic awards and recognitions includes the AP Honor Award, the AP Scholar Award, four Student of the Year Awards, and he is the Tahquitz High School Valedictorian. Connor spends time as a healthcare volunteer, a mathematics tutor, and playing the piano for various events.

teven and Michi Swanson, the co-directors of the Andante Piano Studio, describe Connor as “…unique, thoughtful, and warm-hearted, with an optimistic attitude and open-minded approach to learning.”

Quoting the opening statement of Connor’s personal statement he explains, “Throughout my life I have always been fascinated by all of the spectacular feats humanity has accomplished which has pushed me forward in life to pursue my interests while striving to assist others along my path.”  He goes on to explain how he has worked hard to succeed in academics, music, and athletics, and says “All of these experiences have shaped me into who I am today and will push me forward in life to make my impact on the world.”