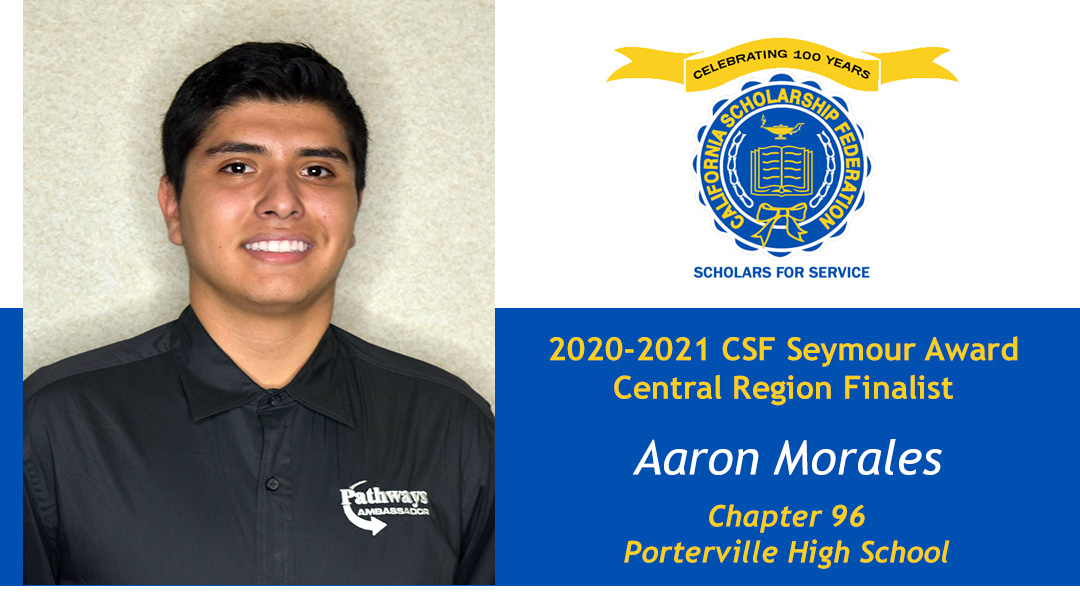 Aaron Morales is a student at Porterville High School in Porterville. He is the President of the Red Cross Volunteer Club; the Student Business Liaison for the Porterville Academy of Health Sciences Student Council; and a Porterville Unified School District Pathway Ambassador. His activities included volunteering at the Monache High School Library; Porterville Farm Day, Porterville, Iris Festival; Porterville Veteran’s Day Parade and Operation Christmas Child. He has also participated in cross country, tennis, as well as the concert and chamber choirs. Aaron’s work with the Red Cross included a 24-hour Cancer Walk and a Relay for Life. Dr. Pamela Avila (DSE Red Cross Advisor) exclaimed “He is an exemplary, effective role model, especially with his ability to inspire responsibility and only see a roadblock as a challenge to be conquered.”

After attending a Teen Truth conference on the social, emotional, and mental health of students, Aaron and a fellow senior felt the need to offer a similar event at Porterville High School. Though the two had initial concerns, they wrote a proposal and gathered the necessary support. His CSF Advisor, Michele Patrick, writes “Over 300 plus students were able to participate in the Teen Truth assembly and it was received with much appreciation and positive views by the attendees.” Moreover, Aaron hopes this becomes an annual event. In his letter, Aaron states “Doing all of this was never easy; in fact, I often felt overwhelmed. But as much as I gave, I received.”

Aaron will continue his education at Claremont McKenna College to study history and/or psychology.